HBRF is committed to promoting the understanding and stewardship of ecosystems through scientific research, long-term monitoring and education, as well as to developing new initiatives that link ecosystem science with public policy. Our work with the community at large is integral to achieving these goals. We interact with the general public via tours and various applied projects, as described below.

In addition to our major, student-focused efforts, the site conducts numerous tours and interpretations for visiting general and professional audiences, such as The New Hampshire Fisheries Council; The New England Forestry Foundation, The New England-St. Lawrence Valley Geography meeting (Nestval), and The Society of American Foresters.

On April 22, 2010—the 40th anniversary of the original Earth Day—Green Mountain College (GMC) inaugurated its new wood biomass co-generation facility in Poultney, Vermont. The facility provides 85 percent of the heat required by the college and 20 percent of its electricity, thus helping fulfill the college’s environmental mission by using renewable biomass energy instead of fossil fuels, an energy solution that reduces the campus’s carbon footprint. 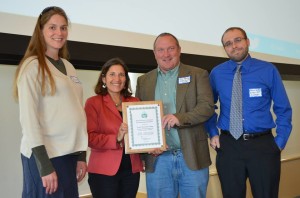 Representatives from Green Mountain College receiving the Vermont Governor’s Award for Environmental Excellence in part due to the Poultney Woodshed Project.

In a joint project, the Hubbard Brook Research Foundation (HBRF) worked with faculty and administrators from Green Mountain College to secure a growing portion of the college’s biomass energy requirements from privately owned forestlands located relatively close to Poultney. This successful project produced carbon savings resulting from lower transportation distances for woodchips, and at the same time supported the local economy by engaging traditional stewards of the forest: landowners, foresters, loggers, chippers, and truckers. In May 2013, Green Mountain College received the Vermont Governor’s Award for Environmental Excellence in part because of the Poultney Woodshed Project, which continues to evolve and serve as a model for other communities (landowners from Alabama and Georgia recently toured the facility and visited local woodlots that supply the college).

The Poultney Woodshed Project resulted from a Hubbard Brook Roundtable held in September 2009 which produced the white paper, “Our Carbon, Our Communities,” and also from information developed by HBRF’s Science Links Carbon project.

Ecosystem services are services provided by healthy, functioning ecosystems that benefit humans and human societies, such as the provision of clean air and water, flood control, wildlife habit, and recreational opportunities. Of the multitude of services forests provide, watershed services are widely recognized as the most critical due to the pressures of climate change and development that affect water quantity and quality. Now more than ever, new strategies to protect water resources and services are needed.

With funding from the USDA’s Natural Resources Conservation Service and other funders, HBRF and its partners embarked on a three-year demonstration project to establish a marketplace to conserve vital watershed services in the Upper Connecticut River Watershed of New Hampshire and Vermont (a parallel project is being conducted in the Crooked River watershed in Maine).

In year one, we conducted research on potential “buyers” and “sellers” of ecosystem services, identified three regions within the watershed to focus our efforts, conducted informational webinars, and supported the first-ever “landscape auction” in the nation. In years two and three, we concentrated on creating a web-based marketplace, Cleanwaterfuture.org, loosely based on crowd-funding sites such as Kickstarter.com and Ioby.org, to enable people to contribute to on-the-ground projects that protect watershed services. As of May 2013, more than $45,000 has been raised through the site for 14 projects. Intended from the beginning as a demonstration project, CleanWaterFuture.org is now a project of the Connecticut River Watershed Council in Greenfield, MA. Other partners for the Northern Forest Watershed Services Project include: the American Forest Foundation, World Resources Institute, White River Partnership, Ammonoosuc Conservation Trust, Orange County Headwaters Project, and Dartmouth College.