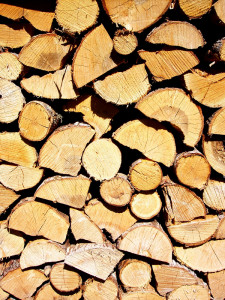 On April 22, 2010—the 40th anniversary of the original Earth Day—Green Mountain College (GMC) inaugurated its new wood biomass co-generation facility in Poultney, Vermont. The facility will provide 85 percent of heat required by the college and 20 percent of its electricity, thus helping fulfill the college’s environmental mission by using renewable biomass energy instead of fossil fuels, an energy solution that will reduce the campus’s carbon footprint.

In a joint project, the Hubbard Brook Research Foundation (HBRF) will work with Green Mountain College to attempt to secure a growing portion of the college’s biomass energy requirements from privately owned forestlands located relatively close to Poultney. If successful, this project will produce carbon savings resulting from lower transportation distances for woodchips, and at the same time will support the local economy by engaging traditional stewards of the forest: landowners, foresters, loggers, chippers, and truckers. See article here.

The project builds on a Hubbard Brook Roundtable held in September 2009 which produced the white paper, “Our Carbon Our Communities” and also on information developed by HBRF’s Science Links Carbon Project . On November 18, 2010, HBRF helped to organize a meeting that included NGO leaders, government agency heads, loggers, foresters, scientists, and wood-fuel industry representatives. The goal of the meeting (co-sponsored by HBRF, the Forest Society, and the Northern Forest Center) was to help determine a framework for dealing with vital and contentious policy and research decisions regarding a range of issues facing wood biomass energy. Looking to the future, a group of HBES scientists has applied to the National Science Foundation to perform a wood biomass energy study, which would include an experimental cutting on Watershed 101 at the Hubbard Brook Experimental Forest. If that project is funded, it will provide substantive new research on the ecological implications of using forests for energy.