Forest carbon sequestration and locally harvested wood used as a substitute for fossil fuels together offer the highest potential to offset carbon emissions for many rural counties of the eastern U.S. Under continuous forest harvest, forest protection can be balanced with controlled harvests for low-grade timber as an alternative fuel source and high-grade lumber to supply durable wood products.

One of the most interesting carbon policy debates revolves around creating incentives to encourage forest landowners to maximize the storage of carbon. Tens of thousands of landowners contribute to sequestering carbon from the atmosphere by keeping forests on their lands, but they are not paid for this service. Many economists believe that the only way to encourage landowners to continue to manage their lands to sequester carbon is to pay them to do so—either directly by purchasing or leasing carbon offsets, or indirectly through tax breaks and other incentive programs.

Some states offer real estate tax incentives to encourage forest protection and management; often these schemes keep land in what’s called current use such as New York States Tax Law (section 480-a). In the future, such laws could be extended to promote carbon sequestration on forest lands and to increase wood fuel utilization.

Carbon is traded in several existing markets, but the price for carbon is often too low for the average small landowner who owns too few acres; often the monitoring and certification costs are too steep, thus making it difficult to turn a profit. Prices for carbon, like all commodities, fluctuate in response to market forces. If new carbon regulatory schemes compel large commercial and industrial carbon emitters to pay for their emissions, these actors may seek to “offset” their pollution by purchasing credits for carbon stored in forests. Trees that previously had explicit value only as standing timber or fuel, or intangible values such as wildlife habitat or scenery, may in the future also be valued for the carbon that they sequester from the atmosphere. Landowners seeking profits from their forests face a challenging and uncertain future. They must decide whether to sell their forest products now for a price certain, or else manage the forest to maximize carbon storage in hopes that future markets will pay a sustainable return in the offsets market. Market possibilities change almost weekly and will be strongly influenced by future regional, national, and international policies.

The basis for international policy and cooperation on climate change was established by a multilateral treaty initiated in 1992, the United Nations Framework Convention on Climate Change. In response to this directive, the United States has developed standardized approaches for estimating and reporting forest carbon storage. In fact, the U.S. has longstanding federal law that requires periodic assessment of forest conditions, and the Forest Inventory and Analysis (FIA) program of the USDA Forest Service provides an online database (http://fia.fs.fed.us) summarizing inventory information collected from thousands of permanent sampling plots on both private and public lands. These inventories were originally designed to provide periodic estimates of growing stock volume for evaluating forest timber resources; however, a variety of professionals use FIA data to estimate carbon storage at state, regional, and local scales.

In the absence of a mandatory federal program, some regions and states have developed alternative emission reduction strategies. For example, in the Northeast ten states adopted the Regional Greenhouse Gas Initiative (RGGI), which establishes a cap-and-trade system similar to the Kyoto Protocol to reduce emissions from power plants. The RGGI system includes forestry offset projects in which carbon sequestered by trees planted on non-forested land (a process called afforestation) can be used as a credit toward a power plant’s emission reduction compliance.

According to the RGGI model rule, offsets must be “real, additional, verifiable, enforceable and permanent,” the general criteria established to ensure the integrity of offset projects. Within the context of forestry-offset projects, these terms are as follows:

Even as the rules for forestry-offset projects change over time, these five criteria are likely to remain in place as the standards that guide the expansion beyond the original framework provided in the Kyoto Protocol, RGGI, and other early adoption efforts.

Forest managers interested in receiving payment for managing their lands for carbon storage should note that the scope for forestry-offset projects under the current policy framework is likely to be quite limited. For example, in the current RGGI model rule only afforestation projects are eligible. Moreover, in the short-term the transaction costs for these projects are likely to be very high relative to the small revenue from the cap-and-trade carbon market. Afforestation projects must complete a detailed application that explains how carbon sequestration will be quantified, monitored, and verified, and general guidelines describe requirements for calculating baseline carbon storage and sequestered carbon. The carbon pools that must be quantified include above- and below-ground biomass as well as soil carbon, and the costs of measuring root and soil carbon will be particularly high. In particular, the project area is divided into relatively homogeneous sub-populations (i.e., tree species, age, soil, slope, etc.); carbon pools are quantified in each sub-population at least every five years using sample plots sufficient to achieve confidence by scientific standards. 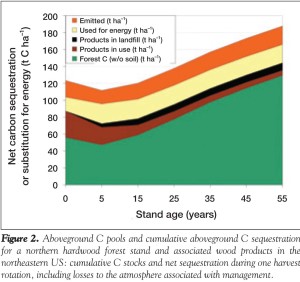 Considering the relatively low per-acre annual value of carbon offsets from afforestation projects, it is reasonable to evaluate approaches for reducing transaction costs, even at the risk of reduced precision in the offset estimates. These expenses could be much better spent on such activities as timber-stand improvement or pest and pathogen control. It may be feasible to rely on standardized projections of carbon sequestration based on the large amounts of empirical data on tree growth in forest plantations or on simulation models that closely mimic stand growth. These sorts of projections could also provide a reliable guide for investment. Periodic improvements in such tools could be incorporated as the offset market matures.

A final aspect of forest policy that could be influenced by carbon markets is forest preservation. Obviously, deforestation typically results in large decreases in carbon storage (this process helps to account for the net carbon emissions from tropical forest landscapes). Potential net carbon emissions associated with forest harvest could be avoided by the creation of new forest preserves. It is also notable that the time scales for the accumulation of carbon to maximum values in temperate forests often are much longer than forest harvest rotations so that net carbon accumulation in second-growth forests can continue for many years in new forest preserves, albeit at much lower rates than in the early stages of succession.

Forest owners interested in assessing the potential value of the carbon stored in their forests should begin by visiting the following sites: